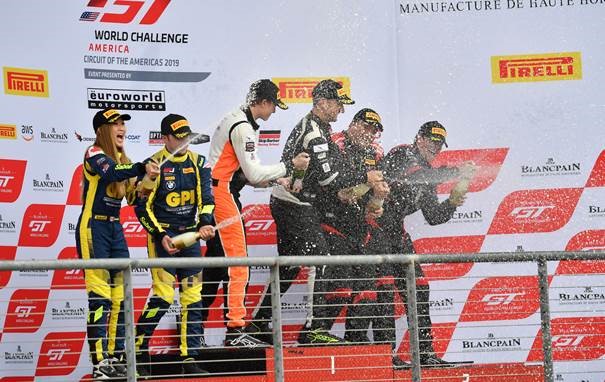 The first race weekend of the Pirelli GT4 America season started off on a chilly note for everyone at the Circuit of the Americas. The weather was unusually cold for Austin, with temperatures dipping into low 40’s. However, this didn’t dampen anyone’s spirits at ST Racing, as the Team scored back-to-back wins in Rounds 1 and 2 of the GT4 America West Championship.

Just a few days before the COTA event, ST Racing added a second car to their lineup when they signed two talented drivers, Jon Miller and Harry Gottsacker to drive the #28 BMW M4 GT4 alongside Samantha Tan and Jason Wolfe’s #38 car.

Saturday’s Round 1 had a rough start as the 31-car field was not all lined up when the green flag flew. Samantha Tan had a great start and moved up five positions on the very first lap as she was able to avoid a multi-car crash at Turn One. Tan ran a solid race and handed over her BMW M4 GT4 #38 car to her co-driver Jason Wolfe at half time. Wolfe quickly moved up the field before a full-course caution was brought out. On the re-start, Wolfe lost a few positions when another car had contact with his #38 machine. “On the re-start” said Wolfe, “we got hit by the Audi and it caused us to spin and lose a few positions, but we made it back to finish 2nd place in our category.”

Co-driver Samantha Tan commented on her first race of the weekend.“Overall, it was a great race. We came in 2nd in class today. The start of the race wasn’t that good. I got the green in the last corner but it worked out for the best because there was a huge crash in Turn One, and I was so far back, I was able to see it and get past all of it, and that put me up five positions already. Both ST Racing cars came in 1-2 today. I couldn’t be happier. “

Meanwhile, Jon Miller had a solid run moving up the field right from the start, and when his co-driver Harry Gottsacker jumped into the #28 car half-way into the race, he didn’t waste any time bringing it back up the field to take the top step on the podium. The Miller-Gottsacker duo was elated to bring home a first win for ST Racing.

“What a fantastic start to the season with a Team 1-2 finish”, said Miller. The start of the race was a bit wild, I was on the outside and saw cars spinning, parts flying. I made an evasive move and avoided it all. I just settled in. It was all about maintaining a gap and keeping the big picture in mind. I wanted to conserve the tires for Harry (Gottsacker), having one of the heaviest cars in the field. BMW struggled a bit this weekend to find the pace to take it against the Porsches and McLarens running up front, and strong here at this track. So, it was all about car management, tire management, race management. The Team did an awesome job on the pit stop. Harry got in, and took it to the end. Hats off to him, he drove a great race and we took home the win for the first race of the year. I’m thrilled.”

Local driver, Harry Gottsacker was all smiles after the race. “So far so good” he said. “I really enjoy driving this BMW with ST Racing. The Team is extremely professional. I just love everyone on the Team. I’m having a great time. I’m really thrilled to be back in a GT4 car. I love being here. The re-start was a bit interesting. It was nascar-style, it was green-white-checker action. But, I was able to stay alive through it, and we came out with a P1 finish on our first attempt this weekend.”

Sunday’s Round 2 was almost a repeat performance of the first race for the ST Racing Team. Jason Wolfe had an amazing start once again, but due to an incident on a re-start, the #38 BMW M4 GT4 sustained damage to the left rear tire and had to come into the pits for a tire change.

“We had a really good start” said the 24-year old driver. “Things were going well, then we got the yellow. On the re-start, I was able to pick up a few more positions, and half-way through that lap, I had contact with the Ginetta car which caused some issues with the alignment of the car and punctured the left rear tire. We came into the pits, got a new tire, and we were able to salvage 4th place in our category. But, it could have been a better finish.”

Co-driver Samantha Tan showed great spunk as she drove the second half of the race, one lap down with a badly aligned car. Still she brought it home and scored some championship points.

“When Jason had to come into the pits for a tire change, that put us a lap down unfortunately” said Tan. “It also caused the ABS sensor to fall off which meant we had no ABS for the rest of the race. When I hopped into the car, the alignment was ruined, the steering wheel was turned to the right even when I was going straight. I just tried to finish the race, tried to get those points for the Championship. It was a little disappointing, but with Jon (Miller) and Harry (Gottsacker) finishing first, I am really happy for them. Overall, it was a really good weekend for ST Racing and a great start to the season. I’m confident that we’ll be doing well for the rest of the season.”

The Gottsacker-Miller duo once again showed what they were capable of, in this second race of the weekend. Greg Creamer, the broadcast announcer described Miller as Mr. Excitement during the last part of the race. Miller was on fire and captured 4th place overall, and took another win in class for the Team. He was also given the Hard Charger Award for gaining the most positions in a race, and his #28 BMW M4 GT4 was the top-finishing BMW in the race. Miller laughed when he heard about the announcer’s comment.

“Greg Creamer gave me the Mr. Excitement nickname back in the touring car days” he said. “This was a really exciting race for us. Harry took the green and started charging forward right away. We kind of threw the kitchen sink at it, setup-wise last night. We’d been struggling a little bit this weekend. So, we made some big changes that we thought would help the car in these cold weather conditions. Hats off to the team because they nailed it. The car was working really well. I hopped in half-way and charged as hard as I could and didn’t really look back. The car was phenomenal. This BMW M4 GT4 was totally in the window this weekend. Hats off to the Team for never giving up and to Harry for improving on his craft the whole weekend, learning a brand new platform for him. I am thrilled to finish 4th overall, and getting a weekend sweep for us in our class.”

Co-driver Harry Gottsacker commented “It was a great race. I was able to survive the start. I picked up some positions the first couple of laps. I was really happy with the car’s performance and how the Team was able to work through the little difficulties we had yesterday with the handling. The car was top shape. I am really excited with today’s results. I was able to hand over a car that was purely a bullet and Jon went out there and got us a P4 overall finish and another win in our class.”

“ST Racing Team Principal Kenneth Tan was quite happy with the results this weekend. “It was a great start to our season” he stated. “We were a little bit rusty during the first race but our crew and drivers were able to dust off the cobwebs and the whole team really came together for the second race which saw one of our cars finish 4th overall. I think if Jason hadn’t gotten the punctured tire during the second race, I believe both cars would have finished in the top 10 overall. With two wins and a 2nd place finish, I can only be elated with our team’s performance in this highly competitive field. I am looking forward to our next race at Laguna Seca where we will improve further on our performance.”

Be sure to join us for Rounds 3 and 4 of the Pirelli GT4 America West SprintX later this month at WeatherTech Raceway Laguna Seca, in support of the California 8 Hours Intercontinental GT Challenge Powered by Pirelli round.

The GT4 America championship utilizes GT4 homologated race cars in two popular race formats – Sprint and SprintX. The past season has seen explosive growth in the GT4 category and has resulted in a wide range of cars that are eligible to race in the GT4 America Series, including the BMW M4 GT4, Chevy Camaro GT4.R, Audi R8 LMS GT4, Ford Mustang GT4, and the Mercedes-AMG GT4. Among other GT4-spec cars are the successful Porsche Cayman GT4 CSMR, McLaren 570S GT4, Panoz Avezzano GT4, and many others.

GT4 America offers two regional series integrated within our SprintX Championship -West & East. Each regional series is designed to offer new drivers a localized race program that is cost effective and competitive, with all the benefits of racing in a professional national championship. Each region will consist of five (5) rounds at top-tier circuits in North America in a two-driver, Bronze-rated format.

With more than 25 years’ experience at the forefront of a continuously evolving industry, SRO Motorsports Group is the established international leader in GT racing.

Best known for the development and implementation of the GT3 and GT4 regulations, SRO promotes and organizes championships that embrace professional and amateur competitors. Its portfolio of highly regarded series spans Europe, America and Asia, while its flagship Intercontinental GT Challenge contests events on five different continents.

The 2019 the season will see more than 100 races run under the SRO Motorsports Group banner, highlighted by the prestigious Total 24 Hours of Spa. In addition to promotion and organisation, the company operates SRO Race Centre by MMC – a high-level technical centre at Circuit Paul Ricard – and provides the ultimate driving opportunities on world-renowned facilities through Curbstone Track Events.  SRO Motorsports Group is chaired by company founder and CEO Stephane Ratel. With offices in London, Paris, Liège, Hong Kong and Austin, its work is facilitated by a dedicated global team of full-time and freelance staff.