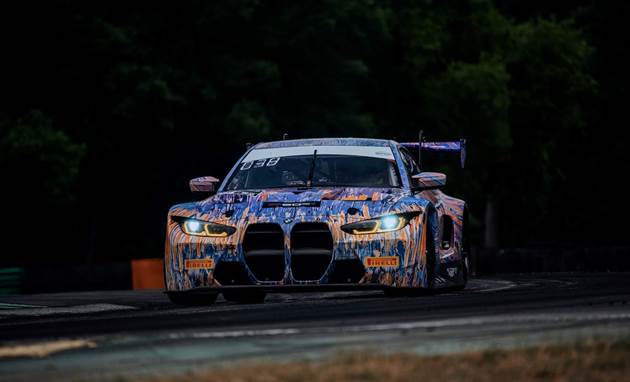 ST Racing is gearing up for its maiden entry at the TotalEnergies 24 Hours of Spa on 28-31 July, and will be joined at the vaunted Circuit de Spa-Francorchamps by some familiar faces.

Team co-owner Samantha Tan, already the reigning Overall GT Drivers’ champion following her first season of endurance racing in Europe, is set to make her competitive debut at Spa-Francorchamps. Alongside her previous/on-going accomplishments in the 24H SERIES, the GT World Challenge America and GT4 America, and as well as class and outright wins at Grand Prix-calibre venues across the globe, Samantha is looking forward to adding a successful 24 Hours of Spa to her rapidly-expanding motorsport resume.

Samantha Tan, co-owner/driver: “The 24 Hours of Spa is the biggest race event the team and I will have ever competed in, and I’m very excited to be one of the 65 GT3 cars entered for the event. After a successful endurance racing season last year and a historic win at the 12H Mugello, we’re looking forward to testing our limits against some of the best drivers and teams in the world. We are also the only Canadian team set to compete at this year’s 24 Hours of Spa, and we are honoured to represent Canada. It’s going to be a very competitive race, but we’re always up for the challenge. I’ll be training hard in preparation.”

Supported by BMW Motorsport, ST Racing has entered its new M4 GT3 for the endurance racing colossus in July, a notable honour given BMW Motorsport’s record 24 outright wins at the 24 Hours of Spa hitherto.

Kenneth Tan, team principal: “I am extremely excited to participate in this highly competitive endurance race, arguably the most competitive and physically demanding of its kind in the world. This all-GT3 endurance event should be an eye-opening experience for us and will surely test our mettle as a team. We have been prepping our car for weeks and hope the momentum we had at the Virginia International Raceway a couple of weeks ago continues at Spa-Francorchamps. I have to thank SRO Europe for allowing our late entry and for all their support for our maiden European race with them.  Also, a big shout out to BMW Motorsport for their continued and very valuable support for our team. We cannot thank them enough.”

Samantha Tan will be joined aboard the #28 BMW M4 GT3 by seasoned teammates Nick Wittmer and Harry Gottsacker, and STR newcomer Maxime Oosten.

Nick, an alumnus of the Pirelli World Challenge, Grand-Am and TC America among other high-profile series, will also be making his debut at the 24 Hours of Spa this July. The experience of the three-time Canadian Touring Car Champion and multi-time TC America race winner will prove invaluable: the Quebec native secured ‘ST Racing’s first Pirelli World Challenge win in 2017 in the TC ranks, and his racecraft was equally as crucial to ST Racing securing its first outright win in the 24H SERIES earlier this year in Mugello.

GT and TCR specialist Harry is set to contest his first race in Europe since an impressive part campaign in the British GT Championship, the young American’s most recent focus having been on a very lucrative campaign in the Michelin Pilot Challenge. Like Nick, Harry is also an ST Racing staple having helped the Canadian outfit secure West Pro-Am Cup honours in the GT4 America Series in 2019, ST Racing’s first championship success. Nick and Harry also completed a fruitful year in GT4 America in 2020, taking home four Silver category wins and 2nd in the SprintX standings.

Nick Wittmer, driver: “I am super excited to be back with Samantha Tan Racing for the 24 Hours of Spa. I love this beautiful racetrack, I love the facility, and I cannot wait to be on-track with the BMW M4 GT3 to show its true colours. I’m also very happy to have Samantha Tan and Harry Gottsacker back on-board as my teammates. The most important things for us to do are to keep the car clean throughout the whole race and maintain our pace. So long as we stay out of trouble, there’s a good chance we will finish well.”

Harry Gottsacker, driver: “I am looking forward to joining the ST Racing team at Spa in July. We had a successful debut outing earlier this year in Dubai and I’m looking forward to building on what the team has learned so far this season. It’s great to share the car with Samantha and Nick at such a historic event, and we will push for a good result for the team.”

Maxime Oosten, driver: “I am really looking forward to this event. In 2020 I participated in the Porsche Supercup at Spa. Last year I raced in the Lamborghini Super Trofeo Europe during the 24 Hours of Spa weekend, and I still cannot believe I will drive the race itself this year. I have yet to drive my first metres in a GT3 car, so I want to give a big thanks to Bas Koeten Racing and to ST Racing for the trust they have put in me and my skills. It’s going to be tough but it’s a real pleasure to be asked to join this race and hopefully I can help them move forward.”

Alongside its 24 Hours of Spa debut, ST Racing will be continuing its GT World Challenge America campaign at Road America on 19-21 August, and its 24H SERIES program with the Hankook 24H BARCELONA on 9-10-11 September.