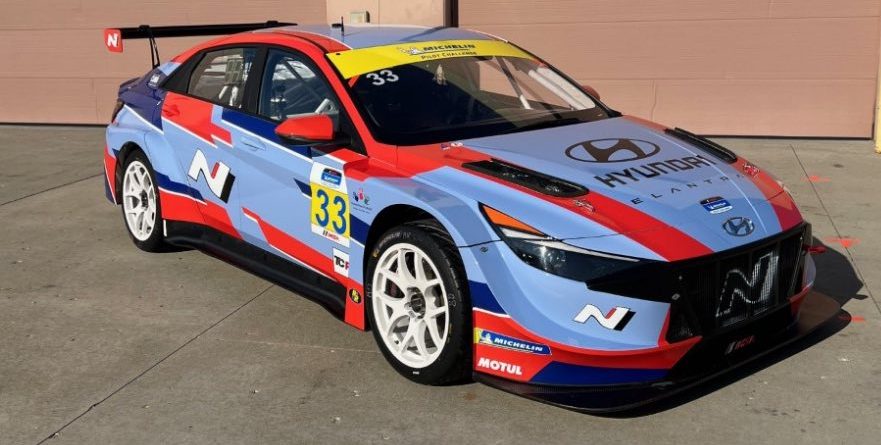 Mixing it up – BHA announces new driver combinations for 2023

Four-time IMSA Michelin Pilot Challenge (IMPC) Champions, Bryan Herta Autosport with Curb Agajanian (BHA) will debut two new driver pairings and a new technical director when the 2023 IMPC season kicks off with the Roar Before the Rolex 24 next week at Daytona International Raceway.

Seeking their third straight Drivers Championship, Taylor Hagler and Michael Lewis will drive the #1 Hyundai Elantra N TCR. Hagler became the first woman to win the TCR championship in North America with her maiden title in 2021 before doubling down on her record with another title in 2022. Lewis will pursue his fourth TCR title in 2023, another series record. Lewis is one of three TCR drivers in the world to have won three titles in the same championship.

New for 2023, Harry Gottsacker IV will pair with Robert Wickens to co-drive the #33 Hyundai Elantra N TCR. Gottsacker holds the series record for pole positions (6) and has won races in each of the last four seasons while racing for BHA. One of the most recognized stories in motorsports in 2022 was Robert Wickens’ very successful return to racing. Wickens made his driving debut using hand controls at the 4-hour season opener at Daytona, which resulted in a podium finish. He went on to score a pole position and two victories in his rookie season of TCR competition. Wickens, a former Formula One reserve driver and veteran of DTM and INDYCAR, now drives with hand controls due to a spinal cord injury while racing in INDYCAR in 2018.

Accomplished Hyundai drivers Mason Filippi and Mark Wilkins will pair for the first time to drive the #98 Hyundai Elantra N TCR. Entering his fifth TCR season driving under the Hyundai banner, Filippi is a four-time TCR race winner and scored two pole positions and two podium finishes in 2022. A veteran of the Hyundai/BHA partnership since its inception, 2019 Champion Mark Wilkins seeks his second title. Wilkins has eight TCR victories, including two last season while co-driving with fellow Canadian Robert Wickens.

Additional changes to the BHA line-up includes the promotion of Kyle Compton to Technical Director. Compton started as an intern with BHA in 2016 and has since engineered two championship winning efforts, his first with Ryan Norman and Gabby Chaves in 2020 and again engineering Taylor Hagler and Michael Lewis to their first title as co-drivers in 2021.

All 10 rounds of the 2023 IMSA Michelin Pilot Challenge will air live on NBC’s Peacock. Live audio along with live timing and scoring will be available at IMSA.com. Follow BHA’s social channels and the teams’ website, www.bryanhertaautosport.com for updates, images, and special features.

Harry Gottsacker IV: “There really seems to be a buzz and confidence about this season, and I am looking forward to getting started with Robert Wickens, Hyundai, and BHA. We’re going into this season with a sharp focus on winning races and putting ourselves in position to win the championship. From our individual performance and team performance in 2022 we know that we have all of the right tools to do the job. I appreciate the hard work that went on in the off season to put this together and prepare for our strongest season yet.”

Robert Wickens: “Im really excited to continue with Hyundai and BHA for the 2023 IMPC this season. After what was a pretty successfull first season back, The goal was to win the championship and we didn’t acheive that. For 2023, I am hopefull to build on the foundations we put in, and working alongside Harry, who is a a proven race winner I think we have all the makings o challenge for the championship, and that is defintely the goal. We have the car to do it and the team to do it, it will be all about minimizing mistakes and executing.”