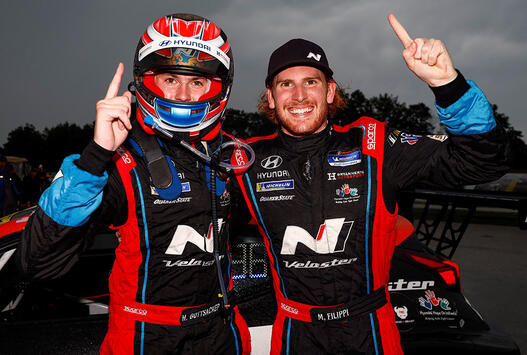 It was a finish well worth the wait at Road America in the IMSA Michelin Pilot Challenge.

After severe weather delayed and consequently shortened the two-hour race to just 75 minutes, it was a battle down to the final lap on Saturday in the Grand Sport (GS) class.

On a restart with one lap remaining around the 4.048-mile circuit, Robin Liddell sat fourth in the No. 71 Rebel Rock Racing Chevrolet Camaro GT4.R. In Road America’s famed Canada Corner (Turn 12 of 14), he made a daring outside pass around the second- and third-place cars of Corey Fergus in No. 69 Motorsports In Action McLaren GT4 and Eric Foss in the No. 56 Mercedes-AMG GT4 for Murillo Racing.

From there, Liddell stalked the leading No. 75 Compass Racing McLaren GT4 of Kuno Wittmer, who had passed Fergus for the lead in Turn 2 on the final lap.

Coming down the front stretch to the checkered flag, Liddell seemed out of reach until Wittmer’s McLaren slowed in the middle of the track as Wittmer inadvertently pressed the pit-lane speed limiter button on his steering wheel. Liddell sped to the left of Wittmer, nearly in the grass, nipping him by a mere .070 seconds at the stripe for the win.

“Once you get weather like that, it really challenges the teams and the drivers to make the right decisions at the right time and to stay out of trouble and keep the car on the track,” said Liddell. “Frank (DePew, co-driver of the No. 71) did a super job as usual. He’s really come on so much, as we’ve talked about before. It’s not easy to handle a car like that around here with very little experience and the changing grip level on the changing surface.

“I was in second and I was like, ‘Oh, happy days, P2.’ Then we’re going up the front straight and suddenly I see the McLaren slowing down. I pulled over to the middle and then he started coming back. I said there was no way I was lifting here, so I just kept my foot in and went by in the grass. It was pretty cool.”

It’s the second victory for Liddell and DePew, who co-drove together to victory at Canadian Tire Motorsport Park just two races ago. The margin is also the fourth closest in Michelin Pilot Challenge history.

“I really just tried to hold position, not make mistakes, bring the car in and get a good pit stop situation,” said DePew. “Robin’s just the master, so we knew if it kept raining that we definitely would climb some positions. I don’t think we expected to win the race but we’re pretty happy with it.”

The view of the photo finish from the pits was just as murky, described DePew.

“Only when (engineer) Phil (Pierce) told me,” said DePew, of when he realized the win. “We saw the McLaren slow and we didn’t know what was going on. It had to be inches or a foot or something. It was not visible to us, but all of a sudden Phil said we were P1, so everybody went crazy.”

While a heartbreaking loss for Wittmer and co-driver Paul Holton, it’s Compass Racing’s best finish since a victory at the season-opening race at Daytona International Speedway in January.

Foss held on for a third-place finish for Murillo Racing, Mercedes-AMG and co-driver Jeff Mosing.

It wasn’t easy, though, and it didn’t come conventionally.

The No. 21 Bryan Herta Autosport Hyundai Veloster N TCR restarted in second with one lap remaining in wet conditions and unofficially crossed the finish line second on the charts.

However, after the No. 89 HART Honda Civic TCR of Ryan Eversley and Chad Gilsinger that crossed the finish line first did not meet drive-time requirements, Gottsacker and Filippi were elevated to the win.

“We could see on the radar that rain was coming, so we just wanted to be out there as long as possible and also meet that drive time, as well as not go to rain (tires) so soon,” said Filippi. “We were like, ‘All right, when we come in, we’re probably going to rains, because the rain’s coming.’ That’s kind of what happened and that’s how it ended up. Harry jumped in and he was awesome. He was so fast. I’m super happy right now.”

It was only one race ago at Lime Rock Park that the duo experienced its first podium, finishing third. Now, Gottsacker and Filippi are entrenched in the TCR championship standings, currently third, 196-187, behind teammates Michael Lewis and Mark Wilkins in the lead.

“That was just crazy,” said Gottsacker. “It’s what it’s all about, really. Before the race even started, everybody seemed like they were playing the tire game, what to go out on and what to do. Then, it was just kind of a nail-biter. That little delay before the race just kind of made everyone more anxious.

“I got in the car with exactly the amount of time left to go. Our car was great. Our Hyundai Veloster N was literally a rocket ship this weekend, especially in the wet conditions. All the guys at Bryan Herta Autosport worked so hard this weekend and just gave us a flawless car. They made no mistakes and we were able to put it all together today.”

The No. 37 L.A. Honda World Racing Honda Civic TCR of Shelby Blackstock and Tom O’Gorman came back for a much-needed, runner-up finish after starting from the pole position. The duo won the first two races of the season to build a solid lead in the championship, but recent back-to-back finishes outside the top 10 demoted them to second place in the standings. They remain in second, six points in arrears of the lead.

Earning a fourth podium of the year in third place was the No. 61 Roadshagger Racing by eEuroparts.com Audi RS3 LMS of Jonathan Morley and Gavin Ernstone.

VIRginia International Raceway will host the eighth of 10 rounds for the IMSA Michelin Pilot Challenge in 2019 on August 23-25. The Virginia Is For Racing Lovers Grand Prix is scheduled for Saturday, August 24 at 2:15 p.m. ET and can be streamed live on IMSA.tv with IMSA Radio commentary.

For news and updates throughout the season, please visit IMSA.com and join the conversation on social media using the hashtags #IMPC and #IMSA.